Texan hard rockers The Sword have released a  live performance of “The Warp Riders” on January 14th and is the title track from the critically acclaimed 2010 album Warp Riders, which saw the band transition into a hard rock-influenced sound.

The lockdown sessions marked The Sword‘s first live performances together since the band went on hiatus in 2018, as they remotely reunited to perform songs like “Winter’s Wolves,” “Working Man,” and put their own inimitable spin on the T-Rex classic, “Children of the Revolution.” On the concept of recording live sessions in isolation, drummer Jimmy Vela commented, “This was a new approach for us; the “Tribute to Kings” tour postponement led to us finding a different way to connect with our fans. It was fun and something we hadn’t tried yet…”

Watch all the Conquest of Quarantine performances so far on the band’s YouTube channel here, and stay tuned for more instalments coming soon.

The Sword’s new compilations, Chronology: 2006 – 2018 and Conquest of Kingdoms, both released last year, each showcase the technically dazzling, riff-heavy and far-reaching metal that the band has been known for since forming 15 years ago.

Conquest of Kingdoms, an explosive three-disc vinyl collection of rarities and oddities, offers 30 tracks (16 previously unreleased) and is housed in a triple-gatefold package, including B-sides, oddities and live recordings of fan favourites like “Freya,” “Iron Swan” and “Fire Lances of the Ancient Hyperzephyrians,” as well as cover versions of “Immigrant Song” (Led Zeppelin), “Nasty Dogs and Funky Kings” (ZZ Top), “She” (KISS), “Forever My Queen” (Pentagram) and more. A truncated digital version is also available.

Chronology: 2006–2018 is a three-disc CD compendium, which — in addition to the aforementioned rarities — also includes The Sword’s greatest hits and fan favourites. Distilling the band’s complete discography, this collection comprises 52 tracks (12 previously unreleased), including the studio recordings of “Freya,” “Iron Swan,” “Cloak of Feathers” and “Deadly Nightshade.” The set also features expansive new liner notes with contributions from the band, plus Lars Ulrich (Metallica), Mark Morton (Lamb of God) and Neil Fallon (Clutch). 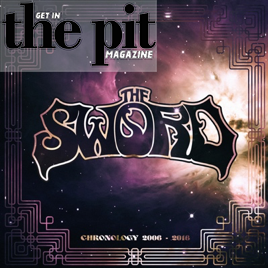 Both titles are available now, click here for Conquest of Kingdoms, or here for Chronology 2006–2018.

Sunflower Dead at The Royal Grove in Lincoln,...